【Mita Festival】SFC students participated in Mita Festival 2017! Let’s see what some of them did

Starting Thursday, November 23rd, Keio’s Mita Campus hosted the 59th annual Mita Festival (sometimes referred to as Mita-sai) for three days until November 26th, 2017. Among the crowd of around 200,000 visitors and 400 groups of students, we found 5 SFC students who, in addition to enjoying the festival, participated in the festival at their own groups’ booths. The two booths we visited and conducted interviews at were the Taiwanese Student Association and Computer Media Production.

Taiwanese Student Association: A taste of Taiwan at Mita Festival

The Taiwanese Student Association is a group of students in Keio University with some sort of relation to Taiwan. This time, twenty-five of them manned the food booth, four of whom are from SFC. United by the same cultural background, they worked together to dye the festival one more unique color this year. 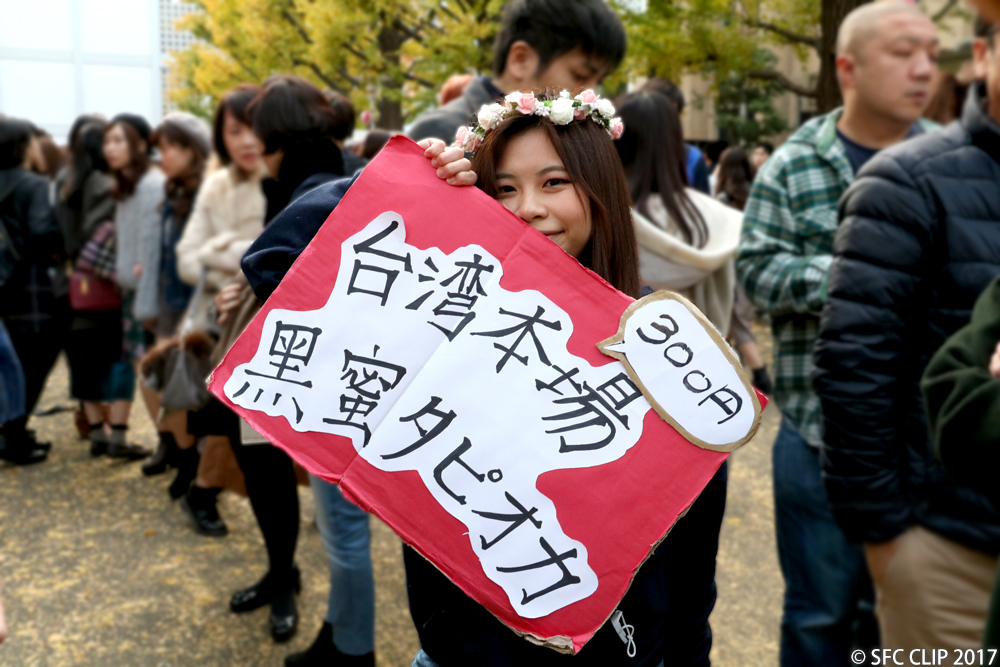 Sora Chang, a third year GIGA student in the Faculty of Policy Management at SFC from Taipei, Taiwan.

Following her promotion, we walked a bit further away from the main stage to find the Taiwanese Student Association booth. 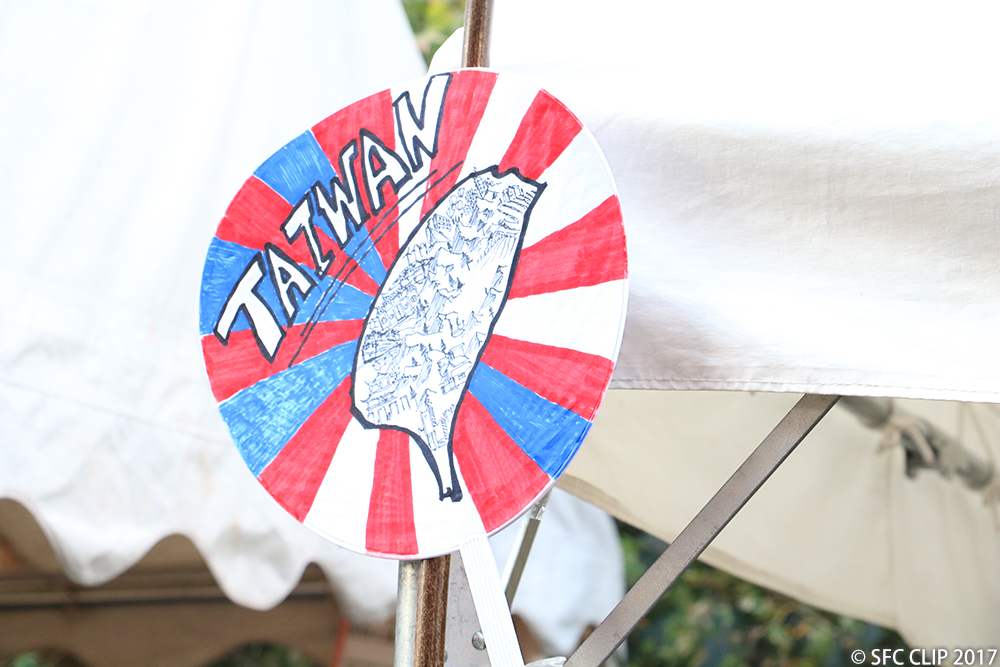 There, Yumi Hoshi was cheerfully promoting one of their most popular drinks. 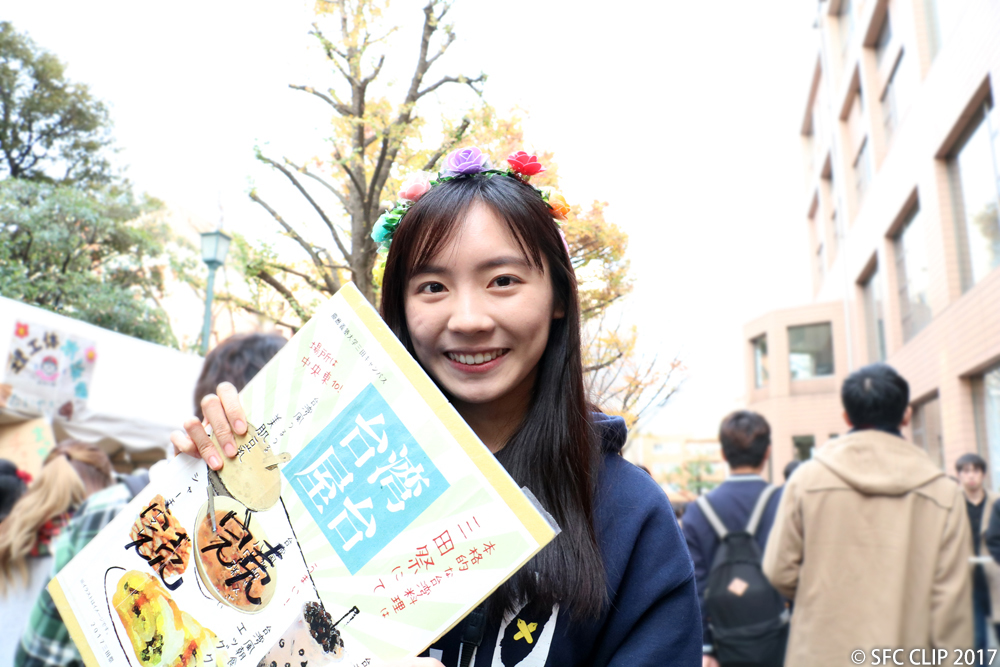 Yumi Hoshi, also a third year GIGA student in the Faculty of Policy Management at SFC.

"The real deal," as she claims, "tapioca tea from Taiwan!" This combination of warm soy milk and soft tapioca bubbles is perfect for chilly weather. During the festival, people flocked to the Taiwanese Student Association booth for this 300yen cup of warm goodness.

She explained that this tapioca tea is different from other tapioca teas commonly sold in Japan. Instead of instant tea, the use of a tea bag makes all the difference. The tapioca flour, milk, and syrup used were all imported from Taiwan. According to her, that’s the magic that makes the tapioca balls soft and fluffy!

Before customers left the front of the booth, another salesgirl at the association’s booth, Jean Chien (third year student in the Faculty of Environment and Information Studies) offered visitors another Taiwanese specialty, Taiwanese egg crepes. Made of simply egg, corn, and a special seasoning from Taiwan, the puffy hot snack cost 400 yen and remained popular throughout the day. 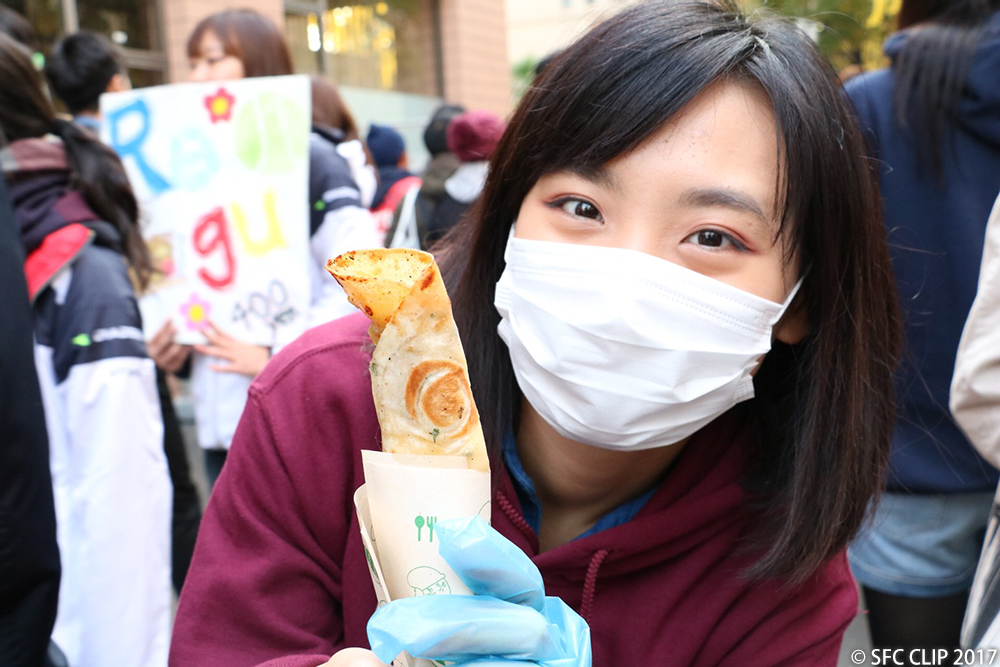 "This is what we eat for breakfast in Taiwan!" –Jean. 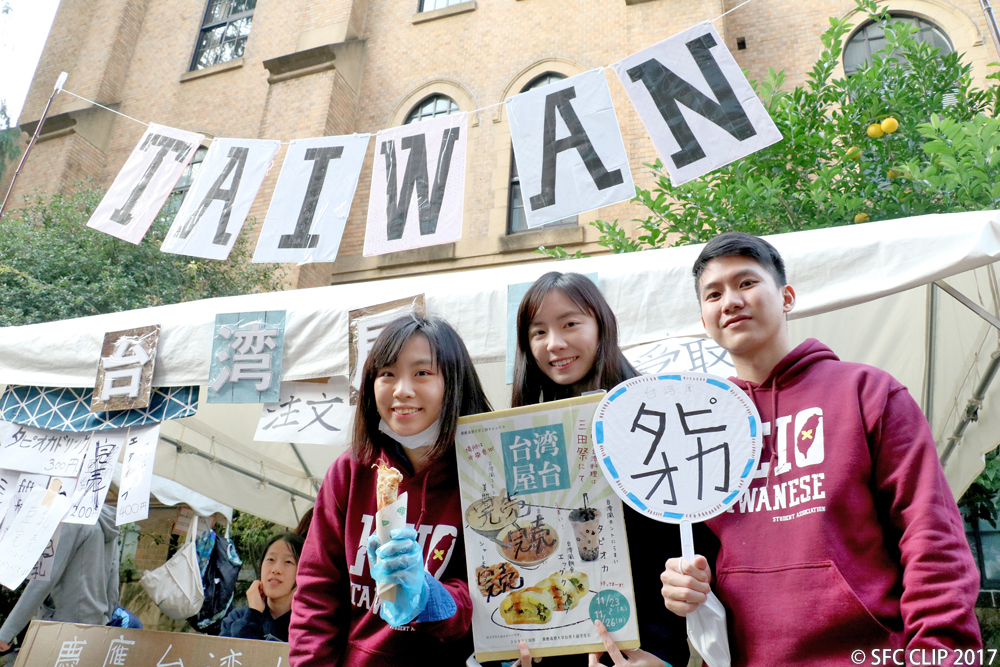 Yumi and Jean called over Vick Chiang (also a third year student in the Faculty of Environment and Information Studies at SFC) to pose for a photo as some of the people manning the booth!

"It’s really hard to get a booth, but this year we got lucky on the lottery. We got the place thanks to other Taiwanese students at Mita and Hiyoshi campus!" Jean said. 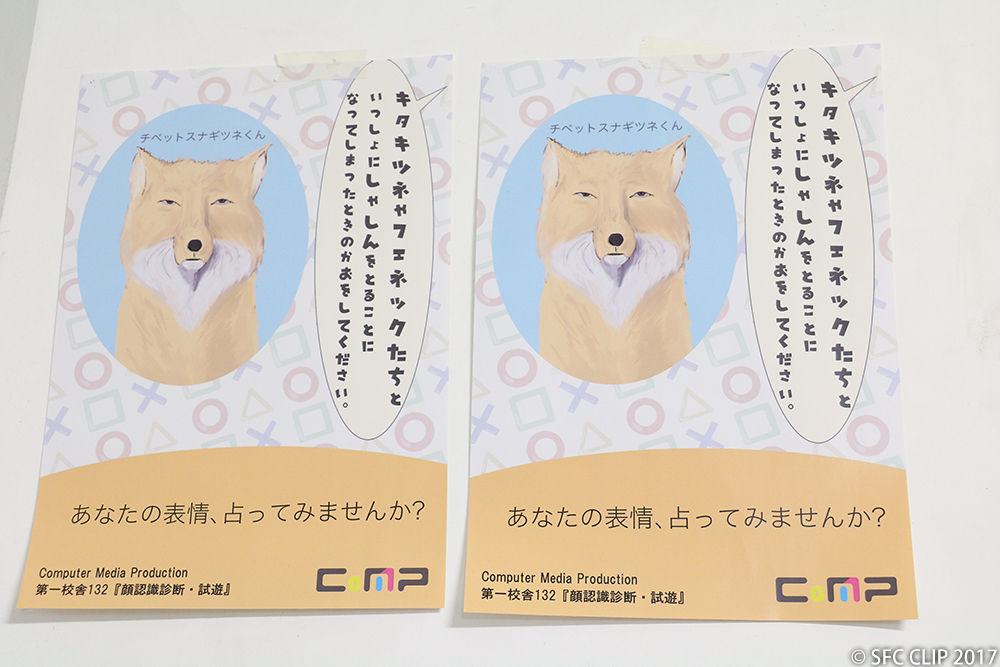 Computer Media Production (CoMP) is a circle that uses computer graphics (CG) and programming to create games, applications, illustrations, and more. In addition to SFC’s annual autumn festival, members participate in Tanabata Festival, Yagami Festival (a school festival held by the Faculty of Science and Technology), and Comic Market (Comiket). This year, CoMP’s booth offered fortune-telling according to an individual’s emotions. There, we found another GIGA student, Taiyo Kato! 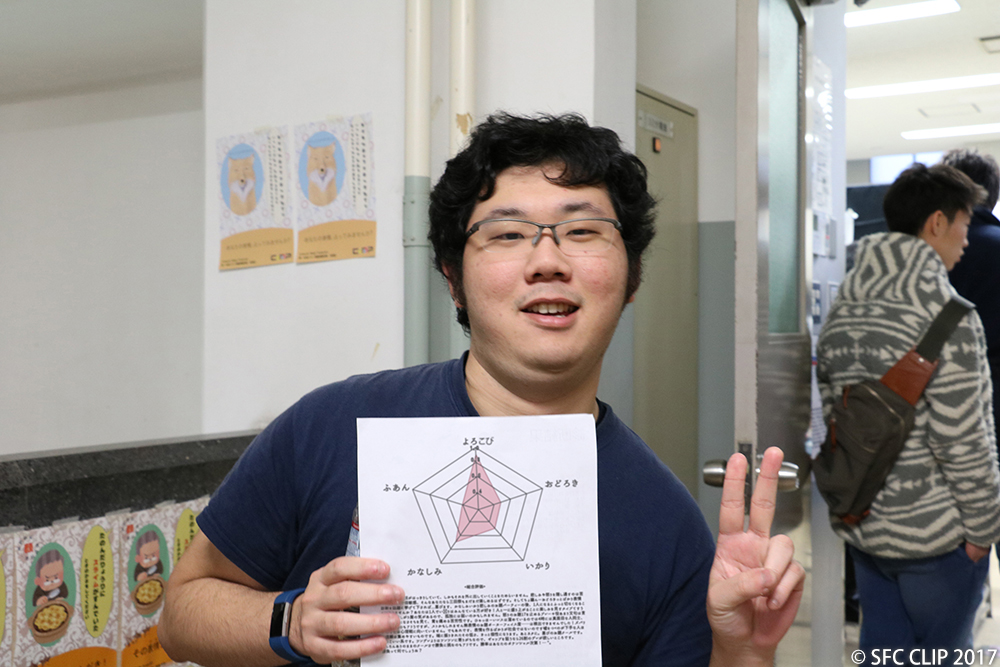 He took the time to explain the comprehensive evaluation used in the fortune telling program. Based on the level of five emotions—joy (yorokobi), surprise (odoroki), anger (ikari), sadness (kanashimi), and anxiety (fuan)—visitors could have their face analyzed, and CoMP’s booth would provide an individual’s fortune for 300 yen! For better understanding, I reproduced the diagram in his pamphlet. 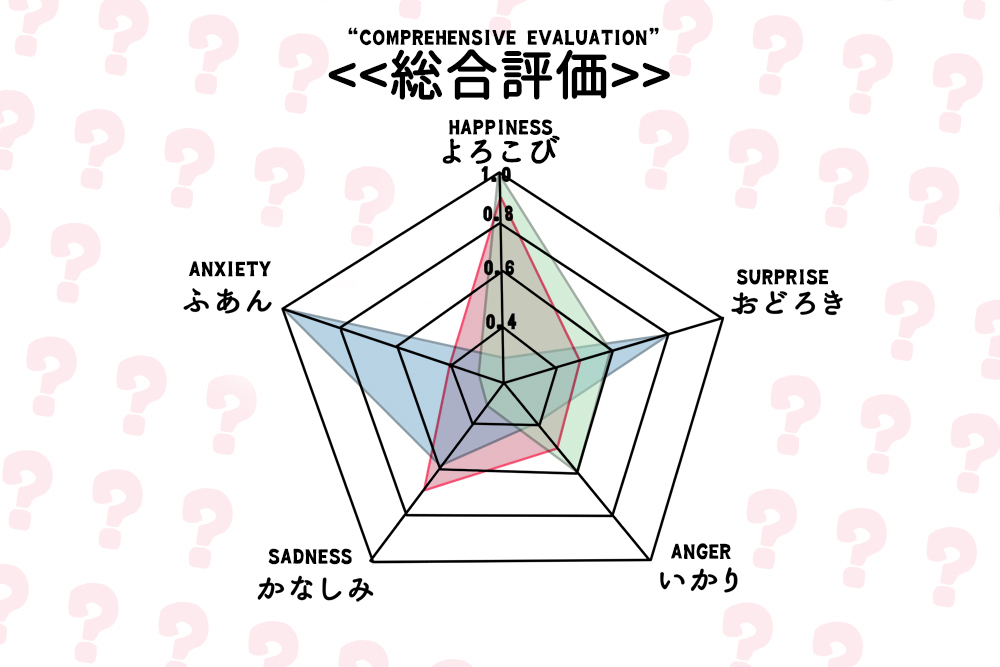 By examining an individual’s emotions, CoMP’s program could receive their "comprehensive evaluation." The results are in Japanese, but translated into English, the beginning of a sample that Taiyo showed us looks like the following:

"You don’t hesitate to express yourself. You’re not good at hiding sadness or anger, and you are sometimes a bit sensitive. However, as you are, you can still enjoy Mita Festival! The diagnosis of facial expression reads […]"

It’s an interesting and unique way to spend 300 yen. Computer Media Production’s booth clearly had a long line of visitors waiting for their fortune telling! 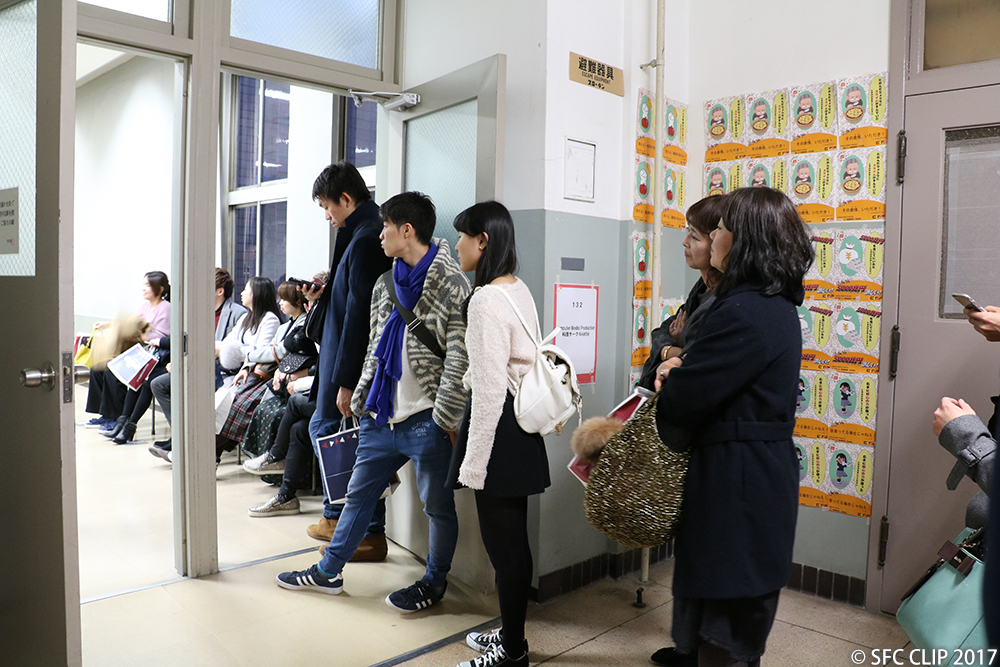 The long line at CoMP’s booth

The advertising for this booth was pretty impressive as well. Posters with cute designs filled the walls of one of the buildings at Mita Campus. The various designs could have been one of the features that attracted such a large crowd of visitors. 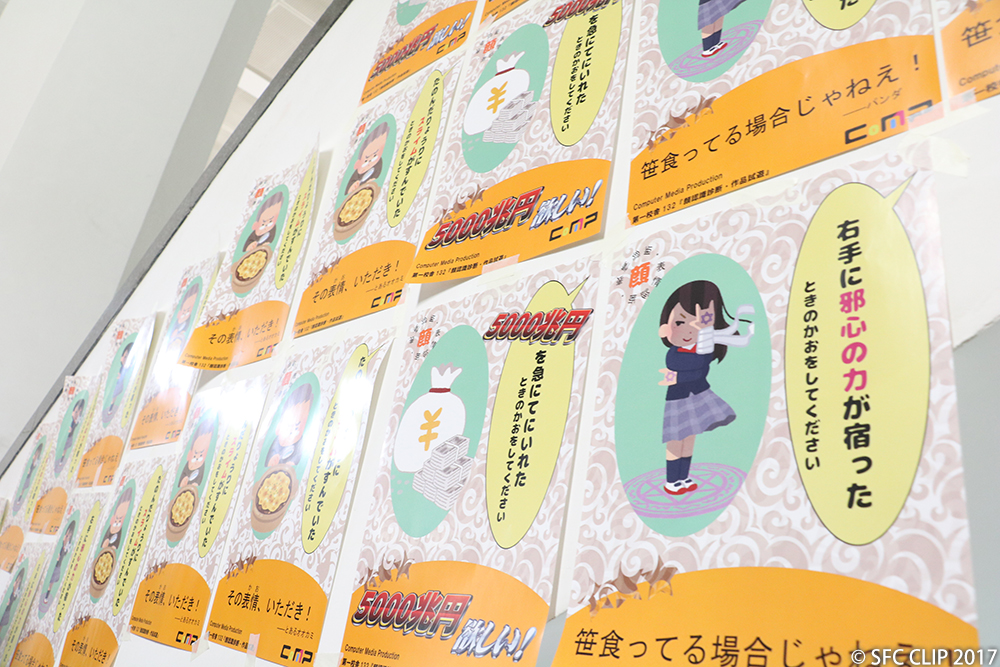 Will these booths be around next year?

Based on our interviews, Hoshi Yumi and Taiyo Kato enjoyed taking part in the festival. Yumi stated she would definitely participate again next year. However, because Mita Festival has a competitive lottery system for a booth at the festival, both are unsure if they will be as fortunate next year. In any case, let’s congratulate them for their hard work and participation in one of Keio’s big festivals this year! 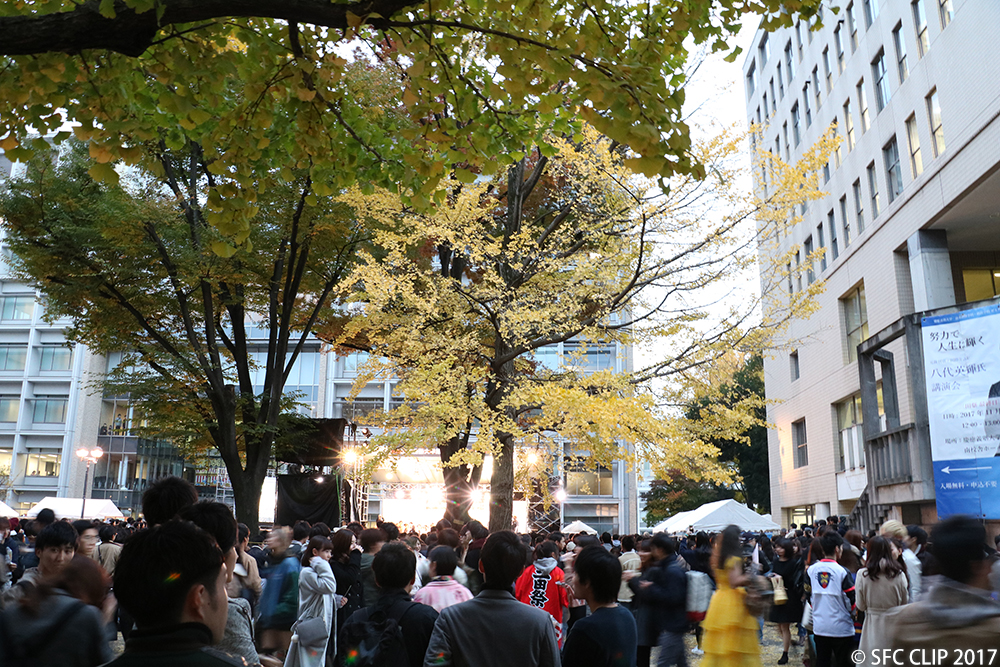