On Saturday, October 28, the first of the 2017 fall Keio-Waseda (Sōkeisen) baseball games was held at Jingu Baseball Stadium. Despite the slight cold and rain, both Keio and Waseda supporters came to watch what is arguably the most famous Tokyo Big6 Baseball League game. The audience varied greatly and included young children, high school students, university students, and graduates of both universities.

Two hours before the start of the game, both teams practiced on the field while crowd members cheered them on from the stands. Groups from both Keio and Waseda chanted anthems praising their respective universities while cheerleaders danced on the stages at the front of the stadium.

As the start of the game drew closer, more and more people filled the stadium stands, with the sound of each university’s supporters chanting their respective anthems.

Tomoki Sekine served as the starting pitcher for Keio, a first-year student who started at SFC this past April. His primary strength is his ability to produce a wide variety of breaking ball pitches. In the five innings he pitched during last semester’s Keio-Waseda baseball match, he gave up only one run to Waseda. 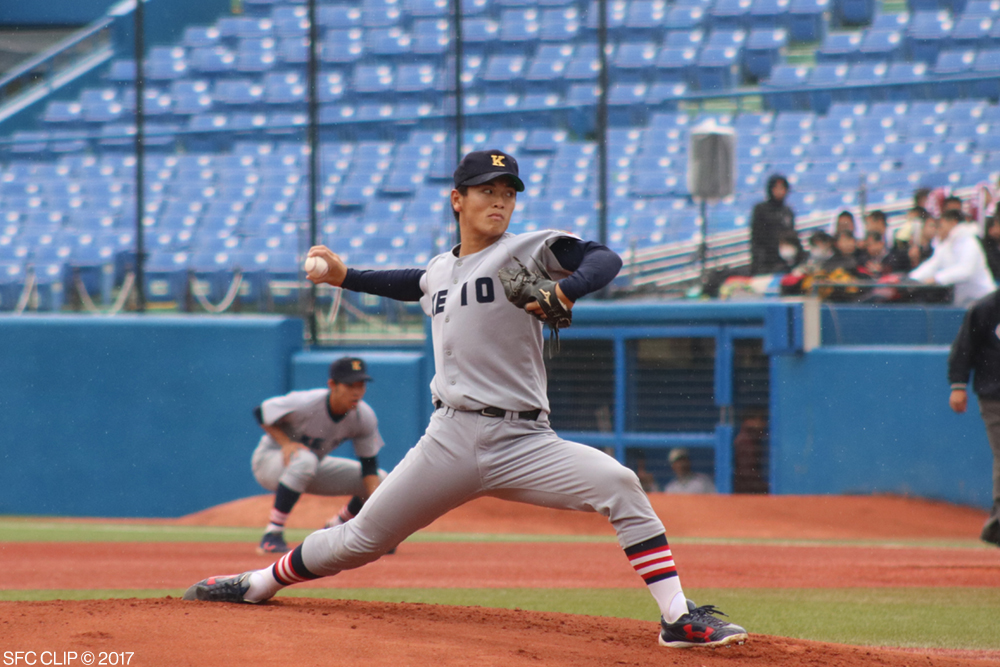 Tomoki Sekine, pitcher for the Keio University team, winds up to pitch during the first inning

Kazuya Ojima served as the starting pitcher for Waseda. His unstable pitching has won him only one game this season, but the fourteen victories he has accumulated throughout his baseball career displays his ability as the ace player of the team. 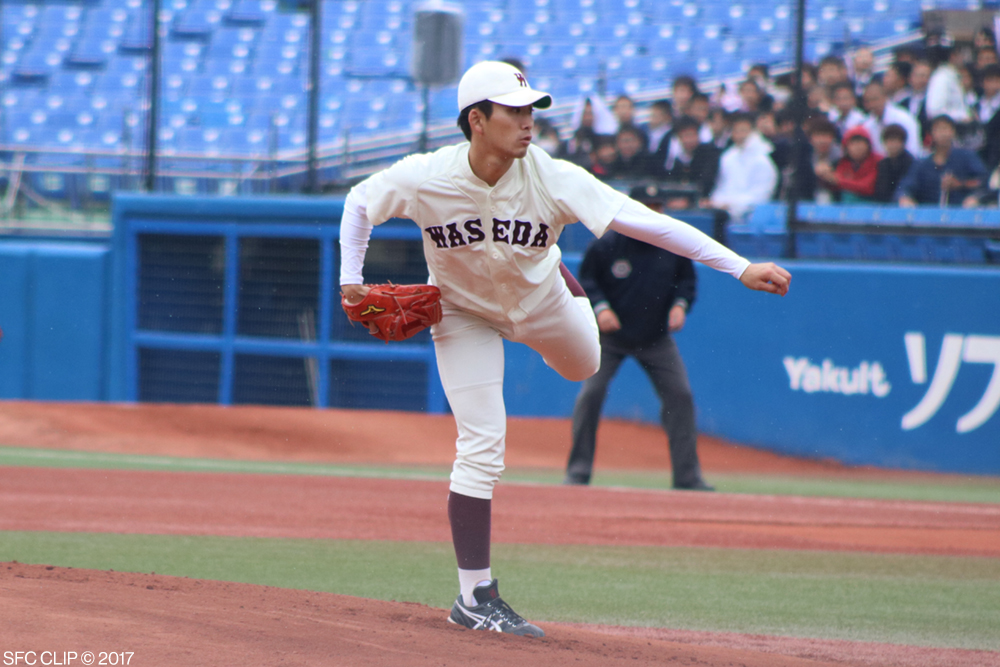 Kazuya Ojima, a pitcher for the Waseda University team, after pitching to Keio

As the start of the game drew closer, more and more people filled the stadium seats, and the chants from the crowd gradually increased in volume and spirit until both teams lined up on the field to start the game, with Keio batting first.

Keio starts the game off strongly 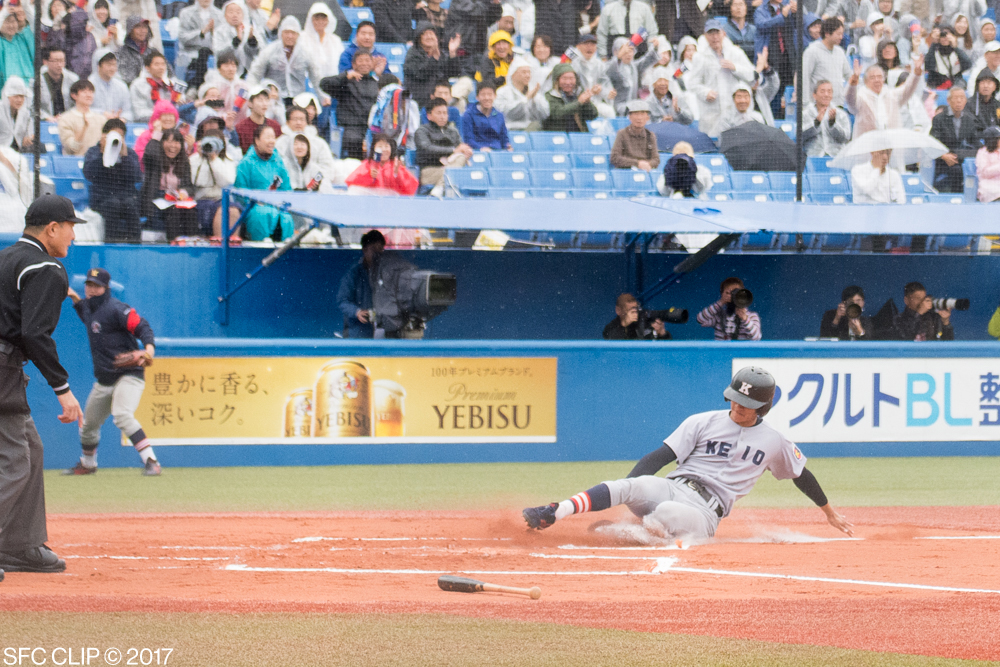 A Keio runner slides to home plate, scoring one of Keio’s two runs

Waseda batters were quick to reply to Keio’s successful first inning. #1 Yagi advanced to first base with four balls, followed by #3 Fukuoka, who made a hit that flew straight over second base. #4 Kato advanced bases, resulting in a fully-loaded set of bases for Waseda. #5 Utoguchi hit a grounder, allowing Keio to tag Kato out easily. However, Yagi was able to run to home plate successfully, scoring a run for Waseda.

However, the momentum from the first inning was lost during the second and third innings; Keio had three strikeouts with no hits. Waseda was able to hit the ball in the third inning, because Keio’s outfielder hesitated before attempting to catch the ball.

Although it started to rain in the middle of the game, Keio continued to play well. The fourth inning was the longest inning in the game for Keio. #5 Shimizu managed to make a hit, and #6 Kurata sacrificed himself and hit a fly ball, allowing the runner on first base to advance to second. Following a groundball from #7 Gunji and four balls resulting in a walk from #9 Sekine, Keio had bases fully loaded but were unable to score. Waseda then tried to catch up with Keio, with two runners advancing to first and third bases. #1 Yagi waited patiently until full count (two strikes and three balls), but he struck out. One of Keio’s runners after successfully advancing to second base

Waseda was playing consistently throughout the game by having at least one hit per inning, but their streak ended in the seventh inning when Keio changed pitchers to Hiroki Sato, who threw a series of fast balls over 145km/h and struck out three batters in a row.

The last few innings went quickly as several batters hit fly balls, which were easily caught by the defending team. The tension during the game reached a peak as the last batter, Mutsumi Kumada, stepped up to the plate with the last pitcher from Keio, Hiroki Sato. Hiroki Sato performed well as a pitcher by throwing two consecutive strikeouts in the last inning, but his luck ran out for the last at bat. After throwing two balls and two strikes, he was able to strike out the last batter, resulting a narrow win for Keio with a score of 2 versus Waseda’s 1.

The next game is scheduled to run tomorrow at 13:00 at Jingu Baseball Stadium. However, due to a typhoon forecasted to strike the Tokyo Metropolitan Area, potential spectators should check the Tokyo Big6 League official website for further updates and detailed information.