The Global Information and Governance Academic (GIGA) Program was established six years ago at SFC as Keio University’s first fully English undergraduate program. The program was initially offered only in the Faculty of Environment and Information Studies in September 2011, but in 2015 expanded to include the Faculty of Policy Management. However, the growth of the program brought a number of problems, which prompted a group of students to form a support group on campus, now known as the Association for International Students (AIS).

AIS officially started operating on April 25, 2016. With the goal of bringing students together to make SFC a better place, the group of students (now officially recognized by Keio as a circle) is actively holding events and discussing how to best represent not only GIGA students but the entire student body. 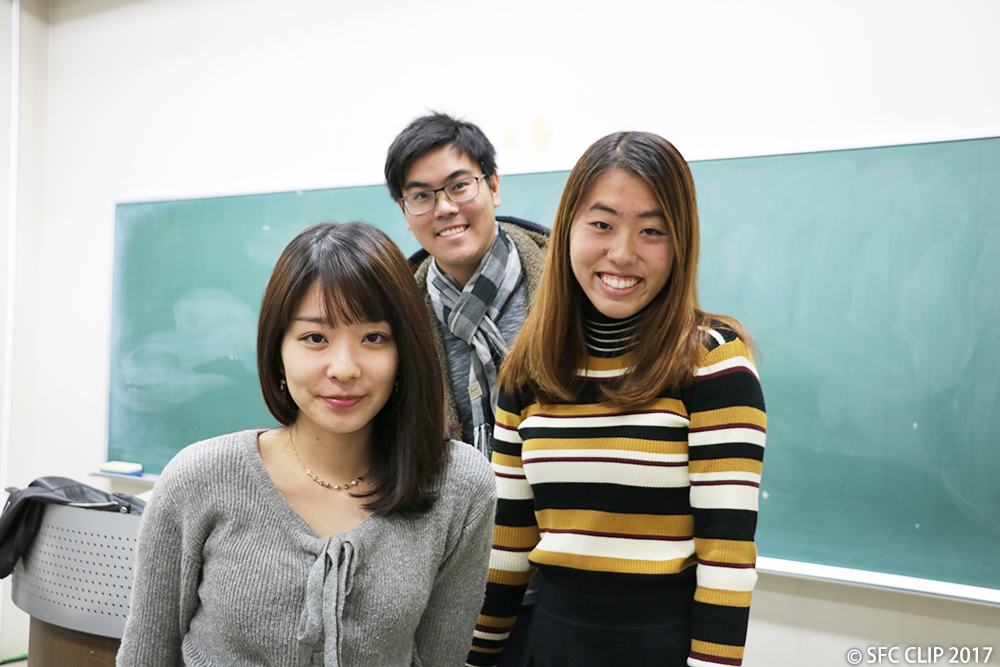 AIS members Mayo, Ibuki, and Aaron before our interview

Editor’s note: unless otherwise indicated, all emphasis is that of the speaker.

It all started with issues in the GIGA Program

—— Why was AIS established?

Mayo: There are two reasons.

Mayo: Students in the GIGA Program were having issues such as the lack of GIGA classes, the lack of professors’ English-speaking skills, and unfair situations where general Japanese students who could not speak English [were] accepted in all GIGA classes.

2) To create bonds and break barriers

Mayo: This comes afterwards, but since we [were] already doing activities within the GIGA Program, why not tie the Japanese students and the international students together in order to create a bond and break barriers? And that’s why we started doing events.

—— What issues have you dealt with currently in the GIGA Program?

Aaron: [Foreign GIGA Students] are very limited in what [they] can choose to take. Sometimes [they] are forced to take classes [they] do not want to, just for the credits.

Ibuki: I take classes in both English and Japanese, and I remember [being called] lucky by [those who can’t]. I really think there should be an increase in classes so English-speaking students have a chance to learn what they want to learn.

Mayo: For example, there is a difference in the pacing of language courses. Japanese language classes consist of different levels: Basic, Intensive, and Skill. In order to reach a certain level where learning Japanese can be useful, people have to climb up from the Basic level, which takes two years to complete, and Intensive level, which takes another couple of years. Usually in French class, students can take Basic or Intensive directly, but with Japanese, students can only take Intensive after Basic.

Aaron: I have only started Intensive now [in my third year of school].

Mayo: We were hoping for [Keio] to let students take Basic and Intensive at the same time…

Aaron: …but the thing is intensive levels are much harder, so I think what needs to be changed is the frequency of the classes so that the students can pick up the language faster. Maybe instead of once or twice a week for basic classes, they could increase the number of lessons per week.

Mayo: We asked Gakuji (the academic affairs office) to set a minimum TOEFL score because GIGA courses used to let Japanese people who couldn’t even speak English register, and it’s especially tough for international students to cooperate with them during group work. This way, non-proficient students are filtered during registration.

Mayo: There are a number of counselors here, but there is only one that speaks English. Hamada-sensei, the new dean, agrees that more English counselors are needed.

Editor’s note: Professor Hamada became the Dean of the Faculty of Environment and Information Studies in September 2017.

—— What do they think of these ideas?

—— Do you think they will implement your ideas?

Mayo: I think that’s why the office made a task force… For example, one that tackles the issues of our cafeteria not providing vegetarian and halal food on campus.

Aaron: Also, they did change the syllabus and set a minimum English proficiency level for GIGA classes.

Aaron: There is a difference between teachers who teach just because [they feel forced] and those who teach intently.

The forming of AIS

Ibuki: It was originally ISA [International Student Association]. When we became an official circle, Mita campus said "no" because it was already used as an official name. That’s why we had to change to AIS.

—— Any help from professors?

Mayo: Hagino-sensei has always been a big sponsor.

Mayo: And also, people in Gakuji and the Office of International Affairs are not professors, but they’ve always been a big help.

—— Why do you think they are willing to be involved in solving these issues?

Aaron: Van Meter-sensei obviously has been in Japan for a long time, and he’s gone through the experience of being a foreigner and having to integrate. That’s why I think he’s invested in making it easier for international students like us to have a better experience with Japanese students.

Ibuki: Hagino-sensei comes to GIGA orientations. He’s in charge of the GIGA Program. He’s always in [Keio’s] YouTube Live sessions to explain about the GIGA Program. So, I think that’s why he’s invested as well.

Mayo: AIS first only held meetings with the dean to discuss problems within the program. As for events, AIS first helped out at Cheese Party held by KBC [Keio Business Contest]. Then, our independent first event, the 2016 Circle Orientation, had around 100 students participating. The big event gave us a big idea of what people are interested in. 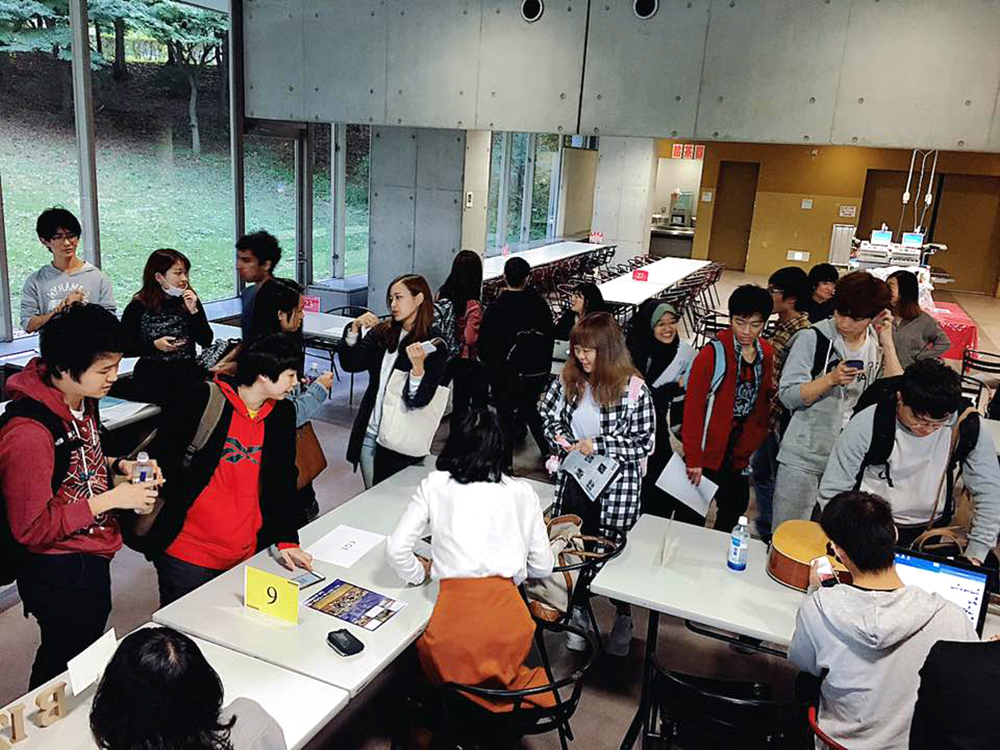 Photo courtesy of Association of International Students: A glimpse of AIS’s first Circle Orientation provided students, especially GIGA, to see some of the circles at SFC.

Mayo: Another important previous event was the Taco Party with Hasebe-ken. Aside from being really easy to make, the Tacos helped bring people to cook together. AIS successfully integrated Japanese students who could barely speak English by activity. Photo courtesy of Association of International Students: AIS Taco Party in December 9th, 2016, had both foreign and Japanese participants enjoying the event.

Aaron: Another event was a camp with Hasebe-sensei’s seminar. The seminar involved how communications are done. From that, Sugihara-sensei and Tomono-sensei’s seminar helped out to spread AIS’ activities.

Difficulties of having an international student association at a Japanese institution

Mayo: I don’t think anyone at SFC ever thought it would work. I’m a little surprised that we’ve come this far.

Mayo: At first, AIS only recruited foreign students due to the focus on improving the GIGA Program, but Japanese students started being interested. Now, we have 14 members, two of [whom] joined at the very recent circle orientation. Currently, AIS has four non-GIGA students.

—— Any requirements to join AIS?

Mayo: AIS does not have any special requirements for students to join, but we have a requirement to stay in the circle. The only requirement for joining AIS is the commitment to be an asset for the circle.

—— How about the meetings?

Mayo: Every semester AIS members have one meeting with the deans and a selection of members of Gakuji. In weekly meetings, we mainly speak in English. English skills are not a requirement, but listening skills would be great.

Ibuki: But members are free to express themselves in Japanese. It’s absolutely OK. 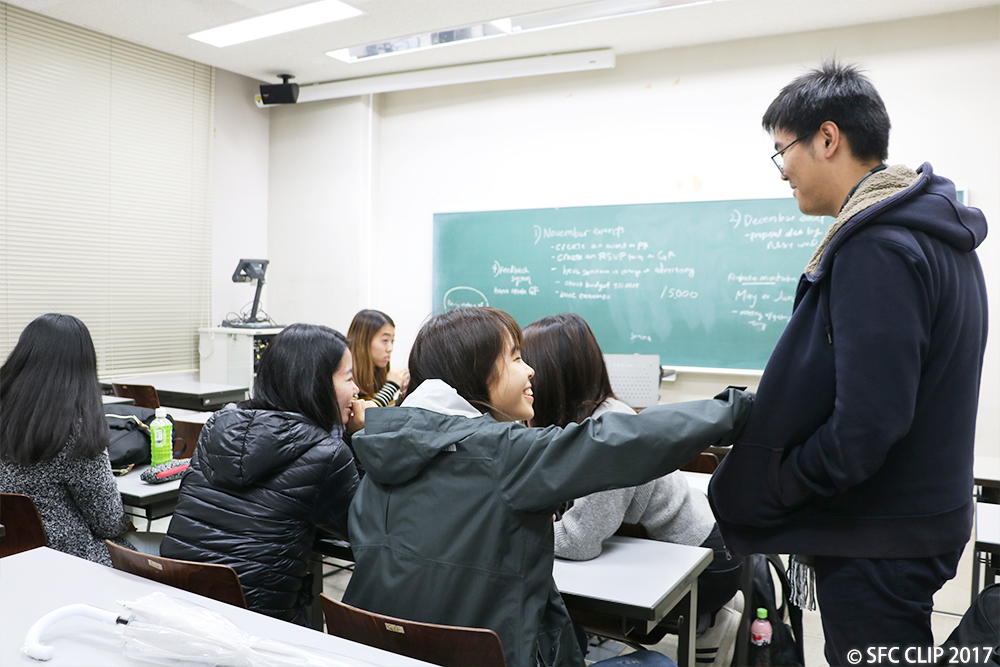 —— "AIS"… Why don’t you put SFC in your organization name?

Ibuki: We’re not allowed to [in accordance with Mita campus’s regulations].

—— Speaking of Mita campus… There is another program that Keio offers in English aside from GIGA. PEARL, short for "Programme in Economics for Alliances, Research and Leadership", offers a BA and MA degree at Keio’s Hiyoshi and Mita campuses. Have you had any chance to talk to PEARL students?

Ibuki: They have better classes which are mandatory, so they have no choice but to take the classes. As a result, they have everything in English. So far there has been no complaints about the English there. Also, the number of students make a difference. Even though it’s new, PEARL Program has hundreds of students already. GIGA Program has only 60~70 people per year.

Mayo: The biggest difference is that we’re a liberal arts school. 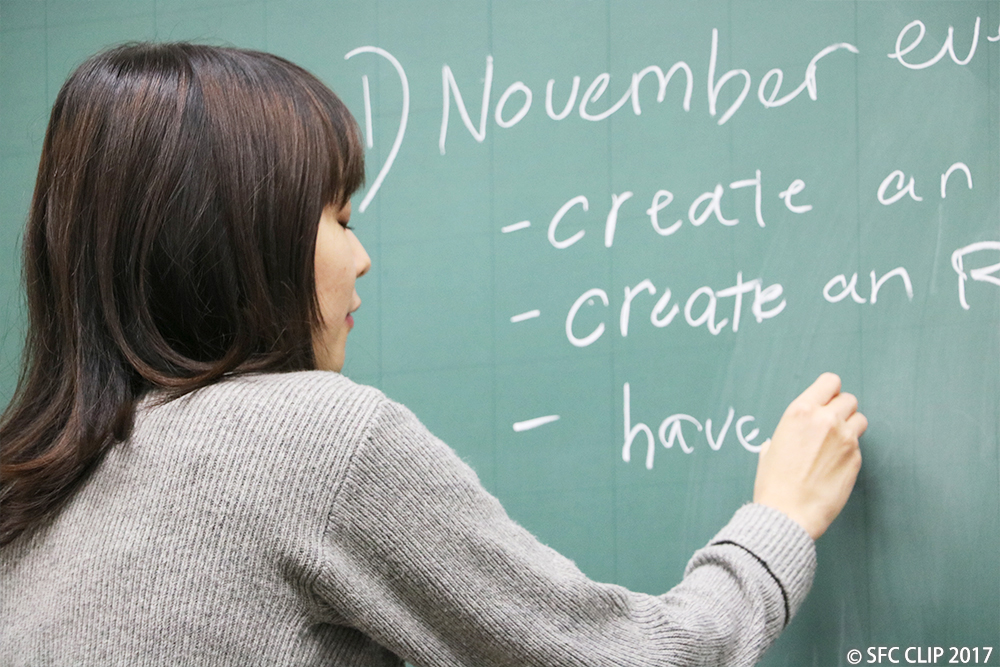 Mayo, the current leader of AIS, leading the weekly meeting and brainstorming plans and new ideas

—— Any upcoming activities from AIS?

Mayo: We’re planning something new; a seminar orientation. There’s already ORF [Open Research Forum], but the thing about ORF is that we question, "Who really goes to ORF?" People who go there are usually those who are planning to attend SFC, like high school students, or sponsors of research. Only a few people from SFC would go especially when the event’s held all the way in Roppongi during Mita Festival holiday. Foreign students would go on vacation. That’s why we’re planning the SFC seminar orientation. Also, do seminars provide their information in English?

Mayo: That’s why; it’s to visualize what the seminar is like in English. It gives opportunity for GIGA students and Japanese students alike to find out what seminars they can join.

Aaron: It’s hard finding a seminar conducted in English. Even if a student finds a certain field that they’re interested in, it’s not necessarily easy for them to find information about it because it’s conducted in Japanese.

Mayo: This event is mainly to help English-speaking students visualize the seminar that they’re interested in, but it’s also to expand our activities to non-foreign students. People have this misconception of the word international.

—— What kind of misconception?

Mayo: So when Japanese students see the word international, we want to make them feel included as a part of the world.