On Tuesday, June 20, Professor Atsushi Okuda’s laboratory (Okuda Lab) and the Laboratory of Islamic Studies (part of the Keio Research Institute at SFC) hosted their annual SFC "Ramadan Night" event on the 25th day of Ramadan. As research director, Professor Okuda opened the event with a lecture titled "Ramadan as a Proof of Human Essence" before inviting guests to a free dinner featuring various halal cuisine.

Ramadan is a one-month period where Muslims are required to fast (Arabic: صوم‎‎, sawm), meaning they refrain from eating, drinking, and performing actions related to lust or desire each day from dawn until sunset. During the month of Ramadan, Muslims are encouraged to do good deeds, one of which is sharing food with others, regardless of whether they are Muslims.

Lecture "Ramadan as a Proof of Human Essence" 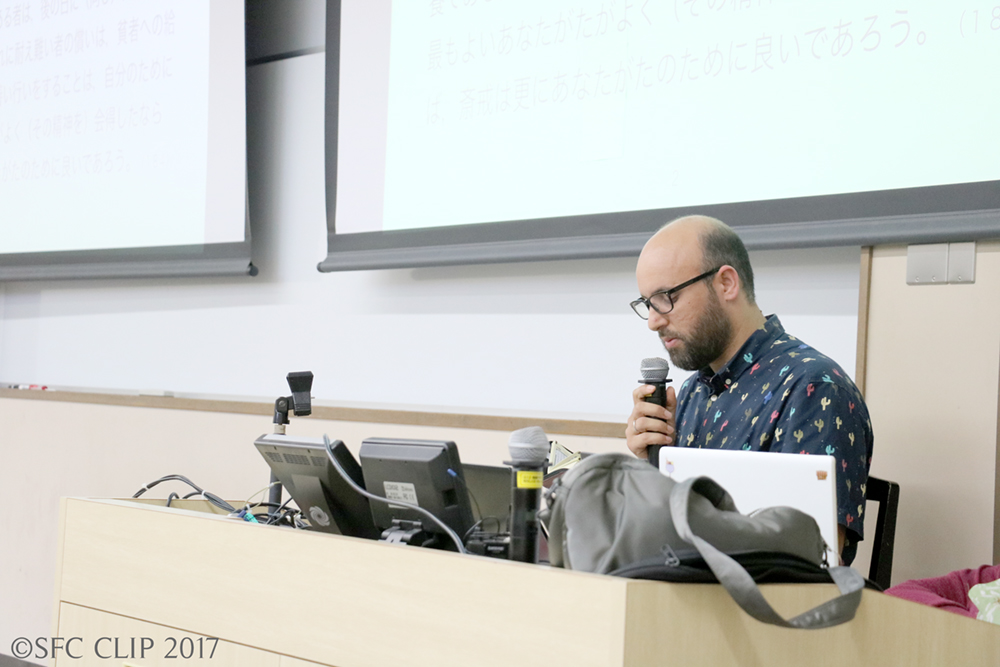 The melodic sound of Surah Al-Baqarah (Verse 183-185) of the Quran reverberated throughout the Ω21 lecture room. The verse, read by Bouamal Hassan, a second-year doctoral student from Morocco, marked the beginning of the Ramadan Night event and created a peaceful atmosphere in the room. The passage is a critical part of Ramadan because it prescribes the way Muslims should fast while performing as many acts of kindness as possible during the month. 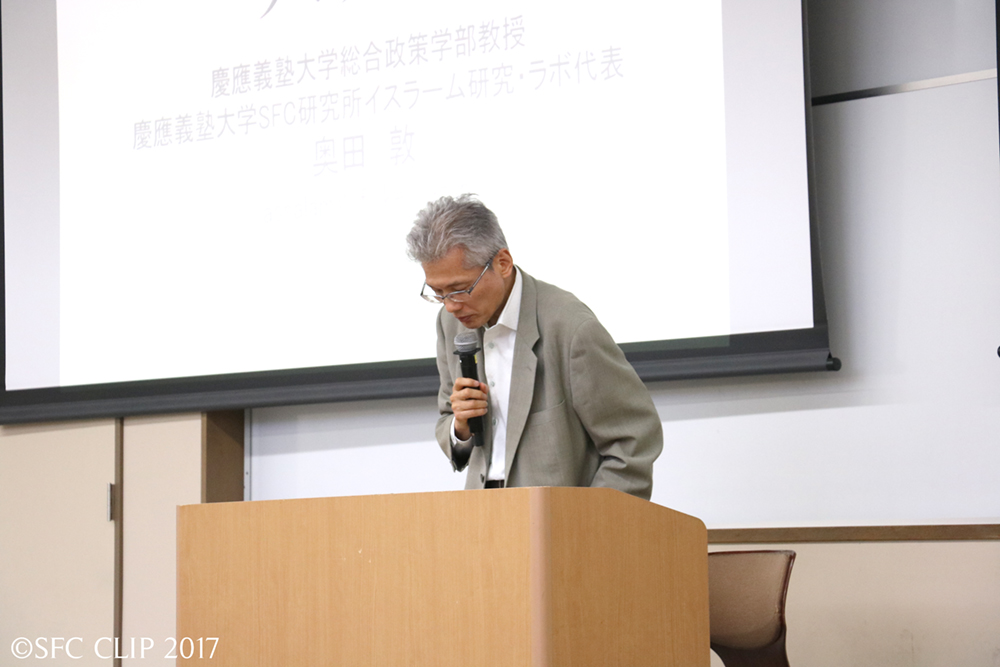 Professor Okuda began his lecture by elaborating on the recited verses from the Quran. "’To empathize with people who are unable to eat’ is a superficial explanation as to why Muslims fast," he stated. He continued by saying fasting allows one’s body to rest and that one’s digestive system, which has been functioning all year long, is put to rest for some time during the month of Ramadan. He described one of the greatest joys of fasting as understanding one’s individual needs; another is the belief that fasting purifies the body, thus fulfilling an individual’s religious duty before the afterlife. 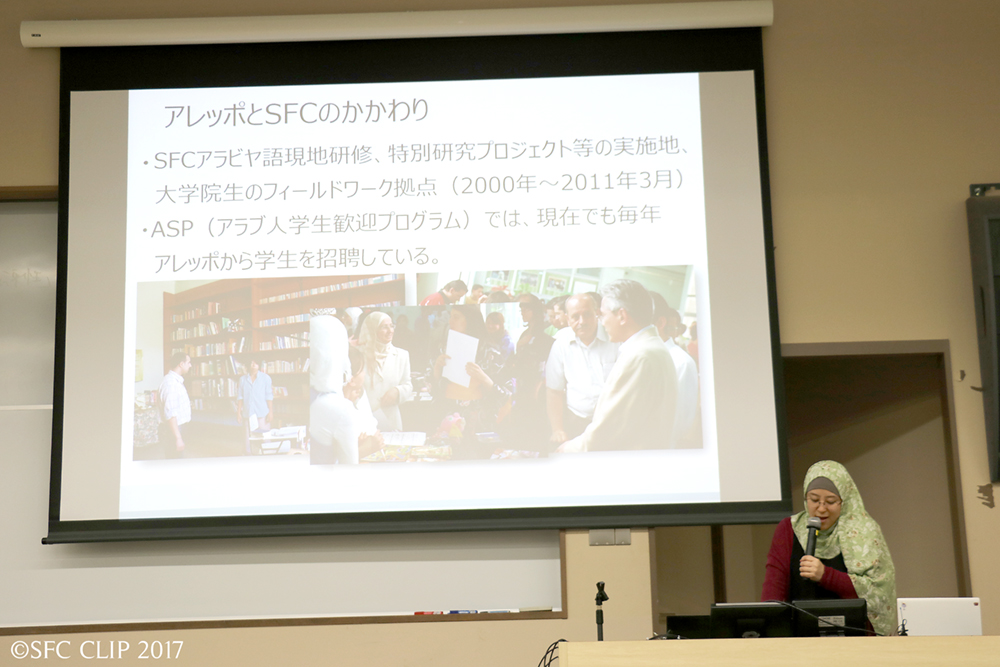 Ms. Uemura explaining one of the Islamic Research Laboratory’s projects

Ms. Uemura Saori, a part-time lecturer at SFC, presented "Assalam Action for Syrian People," a project which aims to raise funds and provide support for refugees and displaced people in Syria. She explained the situation in Aleppo, where many individuals and families were left with limited or no access to water, electricity, or food as the civil war continued. Several members of the SFC community have personal connections to Aleppo; Professor Okuda lived there, and several SFC exchange students grew up or lived there. Later, Ms. Uemura introduced a pilot project to provide food support for poor families and provide pharmacy services. At the event, she launched a project titled "Food will Vanish, but Education Carries On," where guests could donate 500 yen for an elementary student in Syria to afford education for a month or 700 yen for a high school or college student.

Saito Natsumi, a fourth year student in the Faculty of Policy Management, introduced the Ahlan wa Sahlan Program (Arabic: أَهْلًا وَسَهْلًا), or ASP. The program’s name means "[we] welcome [you like a family]" in Arabic. In 2016, the project hosted four participants from the Middle East: Khaled Khateb (from Aleppo, Syria), Khadeeja Kaffa (from Agadir, Morocco), Ahmad Abdulaziz Rakdem (from Fez, Morocco), and Asma Maya (from Fez, Morocco). While in Japan, the four exchange students participated in two activities where they learned how to create reports in Japanese and collaborated with others to create a skit. At the end of the presentation, Ramadan Night participants watched a video documenting the four students’ journeys in Tokyo, such as participating in a tea ceremony and going skiing.

A Warm and Welcoming Iftar Dinner 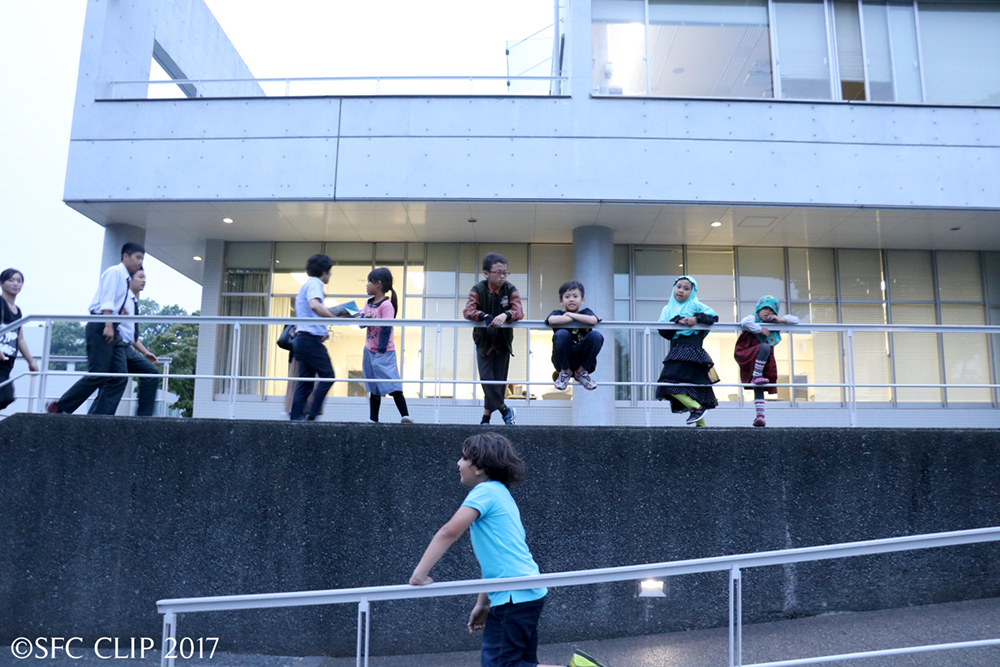 Children of Muslim families wait for iftar, the time when Muslims break their daily fast, which occurs at the same time as the Mahgrib prayer (the fourth of five daily prayers).

After the lecture and presentation, guests moved to the dining area. The menu included date palms, a special Ramadan treat for Muslims, since the prophet Muhammad recommended Muslims end their fast with sweet foods. 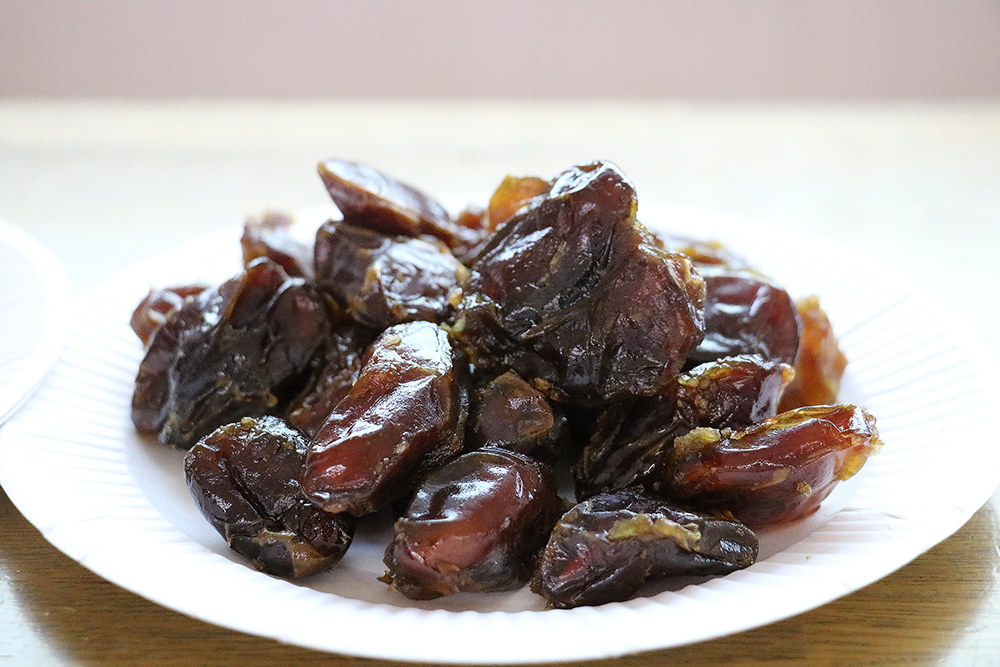 After the call to prayer, known as Adhan, Muslims were allowed to break their fast and eat. Before beginning dinner, some performed the fourth of five daily prayers, known as Maghrib. 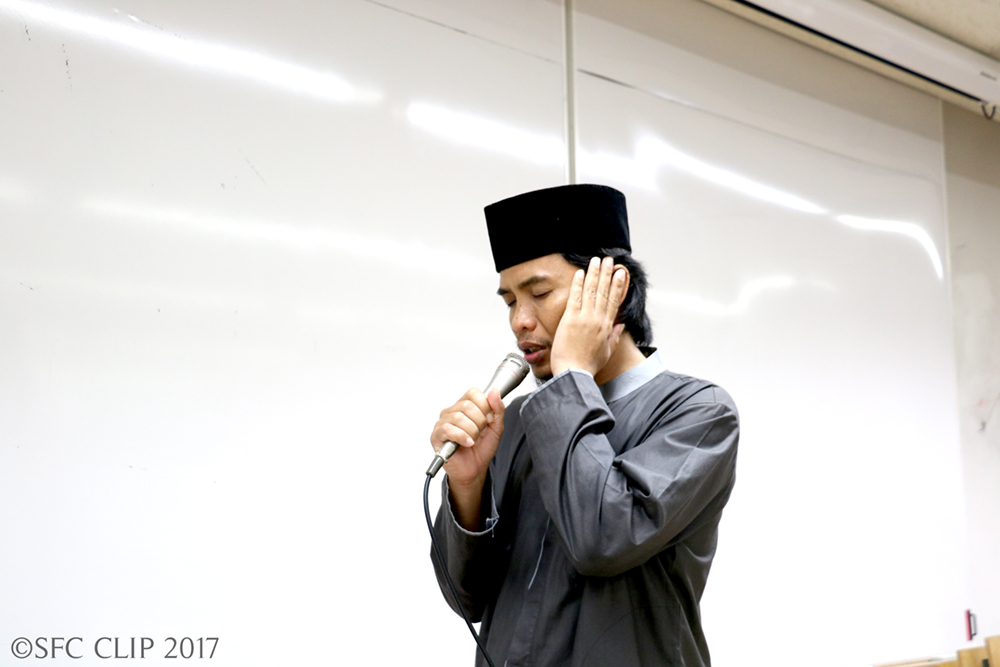 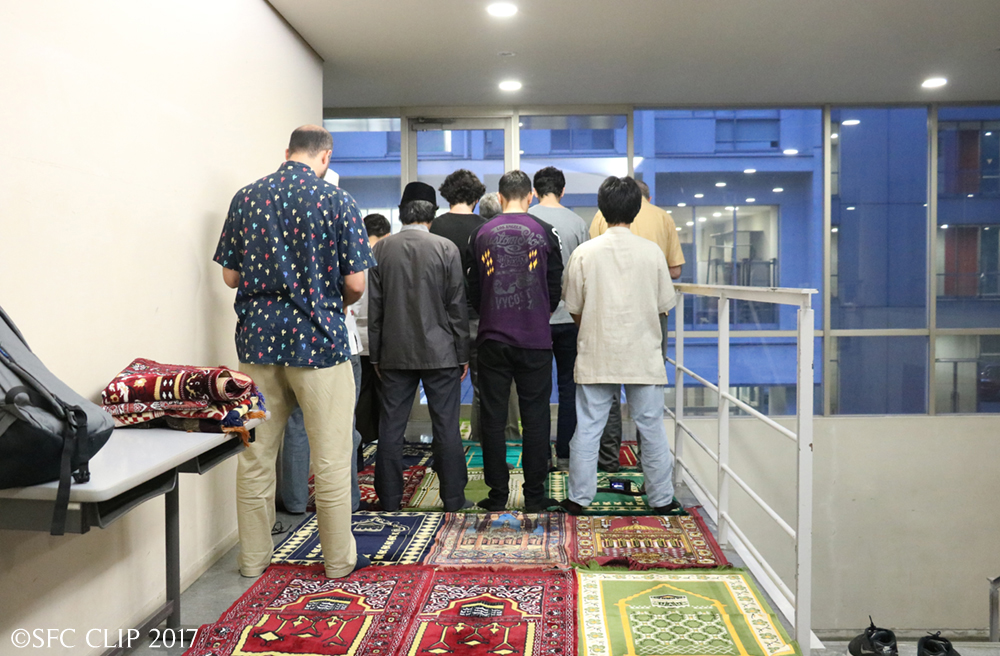 A few minutes of prayer before the main meal 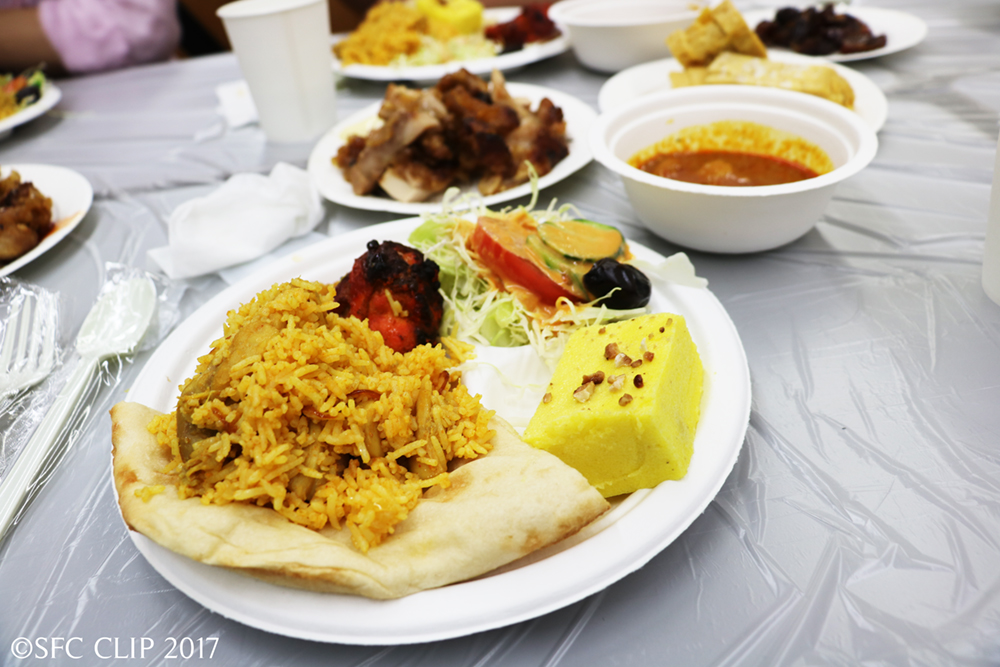 Shortly after dinner began, participants watched several videos, including a skit produced by the four ASP exchange students. Later, everyone watched two videos produced by Okuda Lab roughly ten years ago, which elicited various reactions on the appearances of Professor Okuda, Professor Ahmad Al-Mansour, and other doctoral students and graduates. The lively atmosphere at dinner continued until the end of the event.

After the event, I believe participants were able to experience the joys of Ramadan regardless of their affiliations or religious beliefs. Whether Muslim, non-Muslim, child, or adult, everyone at the event came together through the insightful lecture, entertaining videos, and tasty food. I hope more people realize the Islamic community a welcoming family, rather than a closed, isolated group. As a Muslim at SFC, I hope the Islamic community will be able to hold another successful Ramadan Night event next year. Anyone who was unable to attend the event but would like to support any of the projects should contact Okuda Lab via the link at the bottom of the page.